Last year, Paige’s guide dog Phoebe graduated from Guide Dogs for the Blind.  In what is becoming a family tradition, Paige and her family are raising a third Guide Dog puppy after their first two pups became successful Guides.  Paige wrote her year-end freshman “This I Believe” speech about Phoebe and Guide Dogs has featured her speech in their blog. 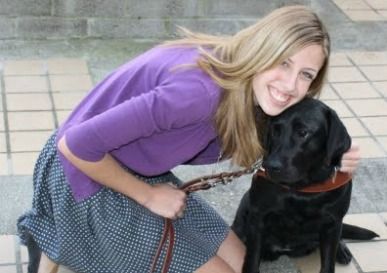 Paige on giving her second successful guide to a college student in Massachusetts: “Phoebe is the greatest gift that I have ever given. Because of her I have touched Rachel’s life; because Phoebe gave Rachel freedom, I gave Rachel freedom….I would never give up my experience raising Phoebe for anything. I believe that through her, I made a difference in Rachel’s life. I believe that I became a fuller person because of Phoebe. I believe in my power to make a difference because of Phoebe.”

Look for Charlene in the library on Thursdays and on campus more regularly in the fall, when Charlene is old enough to go to school with Paige.  Please remember to always ask before interacting with a Guide Dog puppy in training!