Originally published on The Pillar, November 2012 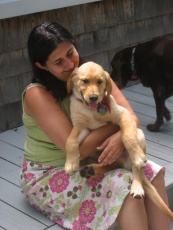 If you are ever cruising down 680 in the morning on the way to Danville, keep an eye out for a woman driving her car with one hand on her heart and the other on the steering wheel repeating, “May all sentient beings be happy and enjoy the roots of happiness.”

That would be Leslie Cushner, Athenian’s bubbly, Tibetan-speaking new addition to the Humanities Department. If you are in one of Cushner’s classes—Freshmen Literature, Explorations of Justice, or Modern Classics—you know that the “may all sentient beings be happy” chanting is not only completely normal, but also really charming; it is all part of Cushner’s love and kindness practice. That Cushner takes time out of her day to actually promote compassion, in fact, encapsulates her entire persona.

Born and raised on the East Coast, Cushner is the type of person whom you want to have a heart-to-heart with. She is an outspoken, but never pushy, vegetarian; she has a passion for dead languages and speaks Tibetan (“I like translating dead languages,” Cushner explains, “because you get to play with it a little before you have to write it down. In order to be good at spoken languages, you have to be able to send things very quickly from your brain to your mouth, and that’s very hard for me.”)

Cushner tries to take a trip every other summer to India; last time she went, she taught English to children whom she dubs “little monks.” As someone fascinated by religion but not extremely religious herself, Cushner used to try to understand spirituality objectively. When she saw the Dalai Lama during one excursion to India, however, that changed. “I cried when he first was really close to me, and then I just started laughing…there was this type of uncontrollable joy. It was sort of this ecstatic experience,” says Cushner. “I realized that as much as I had been trying to understand religion as an intellectual pursuit, that there were parts of religion that I had never experienced like that. And so now I just try to be open and to learn as much as I can. When I’m allowed, I love participating in religious rituals, because I find all of them really meaningful.”

Cushner loves new experiences. She has traveled to the mountains of Tibet and slurped dried yak cheese (“It’s an acquired taste,” she admits). She pursues hobbies that bring her joy—dancing, singing, arts and crafts—even though she may not be good at all of them: “I had this friend in college that played the trombone, and he stopped playing for awhile because he thought he wasn’t getting any better—and I just thought, Lalala, I would just play the trombone and have a great time, even though it would sound awful!” Cushner is quirky in the best sense of the word: she is unrelentingly herself and never apologizes for it.

Unsurprisingly, Cushner is extremely approachable—just ask her about any Wes Anderson movie—but do not be fooled: she is never afraid of tackling controversial topics in class, especially around ones issues of morality. “I grew up in a really privileged environment,” says Cushner. “I went to private school my whole life; so I feel like social justice issues are not necessarily at the forefronts of our minds all the time when we live in such a sheltered community. I feel as though we have a certain obligation towards social justice, and I feel like (we should continue to) challenge the bubble and safety that we live in.

“And I feel to a certain extent that because we live in this safe, nurturing environment, that there are things we think we believe but that actually, when push comes to shove, maybe we wouldn’t necessarily believe,” states Cushner. “So I think we should test out what we think are our moral systems and try to get a deeper understanding of our own morality. I wonder if it’s possible to live your life in a way where we live in accordance with things we believe in, and that (those ideals) aren’t just things you try on sometimes.”

A worthy deliberation, to be sure.

Cushner has lived in California for three years now, and though her knitting has suffered due to a perceived lack of need for big sweaters on the West Coast (don’t worry; I tried to argue that our winters do get relatively foggy), we hope that she stays here for a long time.