Tanner Shaw ’14 blazed his way to another piece of Athenian history as he became our first student to finish among the top 10 individuals at the California State Championship Meet in Fresno.  Shaw’s 52 second improvement from 2011 earned him 7th place among 180 of the fastest Division V runners.  Tanner’s maintenance of a 5:11 per mile pace over the 3.1 mile course was one of the five factors that also helped set a new Athenian team record as we improved from a 9th place finish in 2011 to 6th place in 2012 with a team average pace of 5:27, dropping 10 seconds from 2011. 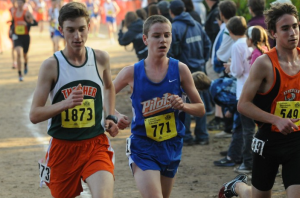 Senior Cameron Taylor showed tremendous strength, poise and patience throughout his injury-riddled season but never so much today as he approached the race with a lead-by-example positive attitude to record his best time on the Woodward Park course.  A very fast first mile as the lead pack raced out in 5:05 pace, Cameron showed one of the advantages of being a 4-year senior as he ran smoothly, confidently and wisely to his own tune for that first too-fast mile (5:15 for Cameron).  Then he passed 41 (!) people on his way to a 27th placing and 31 second improvement. Cameron’s steadfast enthusiasm for the program and his insatiable desire to improve beyond the sight on our current selves has undoubtedly been one of the reasons for our success today.

That the race was much deeper this year was clear from junior Gabe Elliott’s run today as he removed a second from his best time, moved up 10 spots in the NCS ranking from last weekend, and yet finished 9 positions lower relative to his 2011 State finish.  It’s a great example to show that you cannot control anyone but yourself (and that alone is hard enough).  Elliott’s best race of the season, like a rhinoceros, he never stopped charging throughout the 3.1 mile distance.  Gabe was as aggressive passing people up Killer Hill as he was in the last 50 yards.  Given how much Gabe liked Tanner’s shiny medal, expect another Athenian to bring home the brass in 2013.

ng ball near the top of Killer Hill as he tripped on an ankle (not his own) and rolled down three runners.  Up faster than the others, Charlie regained himself and sped the last 1.2 miles to lop 35 seconds from his previous Fresno outing.  Charlie has been a bedrock of consistency and Spartan toughness throughout his three years with Athenian XC.  A dual athlete with swimming, Charlie was spotted on several occasions to be running secret Saturday morning track workouts of mile repeats so as not to ‘lose’ his running shape while off swimming. 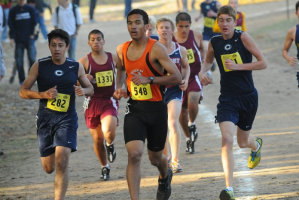 It takes a team of seven to race, and eight to show promise for the future.  Three Athenians made their Woodward Park debut in the tule fog this morning: junior Alex Ball, freshman Eric Strand, junior David Weinmann and 8th man and alternate, freshman Anthony Ottati.

Learning his lesson well from NCS last weekend, much improved harrier Alex Ball did not look behind in this race (first time this has occurred) as he became our 5th man across the line in 18:05.  This marks a 45-second improvement over our 5th man from 2011 (the 5th man is the final runner awarded a score toward team points).  Indeed, so much stronger is out depth this year that our sixth and seventh runners were also faster than our 2011 5th man.  Eric Strand set a bit of Athenian history on Saturday as he became our first freshman to run the State course.  We hope that he will become our first 4-year State senior in a few years.  Junior David Weinmann capped a spectacular late season rise to be our 7th runner, and then sped to Athenian to fulfill his other varsity obligation as an Owl basketball player.  We hope to see him on the track after scoring many points on the court.  Freshman Anthony Ottati was our official alternate, running the course on Friday paced by a trio of his teammates as he completed the course in an easy to remember 20:12.  I’m confident that Ottati will be racing around this venue in 2013.

Thank you, everyone, for a great season.  Thank you to Kim and Steve for the bagels and fruit Saturday morning and to each of the parents for dinner and lunch this weekend (Rob Shaw, Chuck Taylor, Tim and Michelle Thimesch, Kim Risedorph, Steve Elliott, Steve and Nina Strand).

Check out a video of the race here.

Photos and video by Donal Pierce.