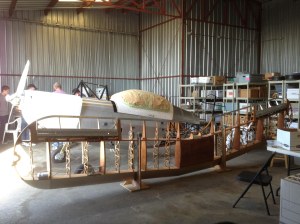 The wooden “ribs” of the wings.

The sale of the Piper Cub plane funded the purchase of a second aircraft project, aptly named “Spirit of Athenian II.” This project featured The Christen Eagle II airplane, an aerobatic sporting biplane aircraft. Marsh and Bruce welcomed the assistance of Dr. Jim Manley, an Eagle enthusiast and Aerobatic Pilot extraordinaire. His expertise with flying and building this type of plane was invaluable to the students and the program.

The Christen Eagle II plane is 18-feet long, with a wingspan of 20 feet. During the after-school work sessions, Athenian students built the wooden ribs of the wings, and some even “signed” their work, etching names or initials into the ribs that they helped build. The body of the plane was completed, leaving only the “skinning” process, whereby fabric is stretched and sewn over the wings. Because of the demanding nature of this process, and the fact that it would hide the workmanship of the wooden wings, it was determined that a prospective buyer would probably prefer to see the wings “as is”, without the skin.