by Naomi Ahn ’15, an international student from South Korea 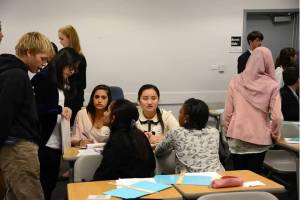 Along with classmates from the International Relations seminar, I went to the 23rd Annual Model United Nations (MUN) hosted by the Contra Costa County Office of Education. For more than two months prior to MUN, we have learned international politics, functions of the United Nations and its sub-bodies, and essential skills required to succeed at MUN, such as public speaking and collaborating with other students to write a resolution paper. After extensive preparation, and despite being nervous to speak in front of a room full of strangers, I gave the first opening speech in my committee, the United Nations Children’s Fund (UNICEF). The pre-announced topic we prepared to discuss was childhood obesity. Even though there were a lot of veteran delegates from other schools who have been to many MUN conferences, I was recognized by other delegates as a leader as a delegate of Japan. Full of people with a competitive atmosphere, the room soon became a place where delegates representing countries throughout the world defended their positions on solutions to childhood obesity and built alliances with others during un-moderated caucuses.

At the end, several groups of delegates with sponsors and signatories from other countries presented their resolution papers and we moved to

voting blocs—where delegates decide whether a resolution is passed or not. With sponsors from Germany, China, D.R. Congo, Pakistan and signatories from the majority of delegates, I wrote a resolution, which proposed to impose a tax on unhealthy food products, build community farms with economic incentives and government subsidies, and establish a standard on school meal plans for children under the age of 18 in primary and secondary schools. With more than two thirds of the votes in favor of the resolution, this resolution along with two other resolutions  successfully passed. Though I was still nervous when making speeches and commenting on other speeches, MUN taught me how to coordinate with other delegates, speak confidently, and become a leader of a group of people I had not met before. The International Relations students were a unified powerhouse, earning nine Delegate Awards for outstanding international cooperation. Based on what we learned from CCCMUN, we plan to participate in other MUN in the spring semester and strengthen Athenian MUN program, with the possible creation of a MUN club. 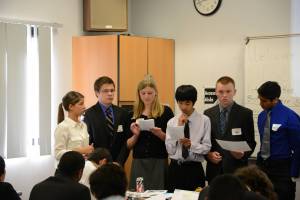 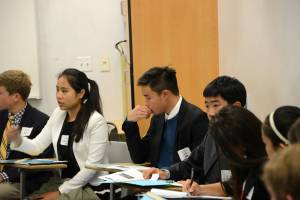 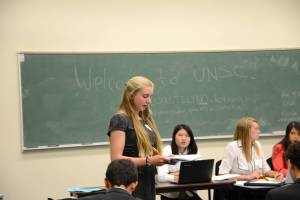