Athenian was one of six founding schools of Round Square, an international consortium founded by educational leader Kurt Hahn. This semester, two Athenian students are on exchange at two of the other founding Round Square schools, Salem School in Germany and Gordonstoun in Scotland.

Salem: Life in a German Castle

I’ve been here for almost a month now so I figured it was time to send an update to you all. The first week I spent getting to know the place and the people. I met the other exchange from Markham College in Peru, as well as the other girls in my wing, Mädchenbau 1, including my roommate Delia who is from Switzerland. During that first week I got to take a trip to the town of Überlingen which is about a 15 minute bus ride from campus, where most of the people from Salem go to do their shopping, go out for dinner or see a movie. 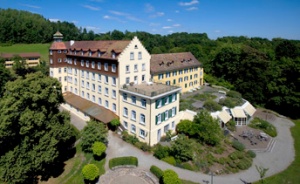 Since they don’t do exchanges into twelfth grade here, I am taking classes in the 11th grade in IB (International Baccalaureate) Year 1, which is the program where the classes are taught in English. There are two academic programs at the school, the IB and the Abitur. The Abitur is the German-speaking academic program and about two thirds of the 300 students here are in that program, including my roommate. Luckily, most everyone has, at the very least, a pretty good understanding of English. I am living on the 11th grade campus called Spetzgart, a beautiful old castle overlooking Lake Constance. The 12th graders live a five-minute walk away at the Härlen campus, which was built in the early 2000s. Similar to Athenian, there is a morning meeting at the Härlen campus every Monday where there are announcements and things of that nature so I’ve gotten to spend time at both campuses.

One thing that is different about Salem is that there are classes on Saturdays. While this was a little bit of a surprise for me, I’ve found that it is not so bad to have class on Saturdays especially because my only class on Saturdays is Art and I have plenty of free periods during the week to explore Uberlingen or hang out with friends. In fact, my schedule here is similar to what one would typically have in college rather than high school, with classes meeting once or twice a week for an hour and a half each meeting. Some days I don’t have a class until noon! They also do something called Dienst here every Monday, which is basically community service. Some people help out with the fire service or mentally ill or at the café on campus as well as many other things. I will be working at the café where I will hopefully make all the drinks correctly; I’m told the coffee machine is idiot-proof.

It has been interesting to experience life at a boarding school as everyone at Salem is a boarder. Not only have I gotten to meet people from all over the world, but I’ve also come to learn what it’s like to live at school. It’s great to be able to have your friends just down the hall from you; at the same time, if you’re trying to go to sleep and someone upstairs has just discovered a mouse in their room it might be a little while before you have peace and quiet. I got to be part of my wing’s photo for the yearbook where we all dressed up as stereotypical types of students (nerds, sporty kids etc.). I was supposed to be a stereotypical American high school girl, which to them meant I had to either dress up like the Mean Girls characters or the Gossip Girls characters. I don’t think I pulled off Blair Waldorf’s look but I think they were satisfied with my attempt to look the part.

I could go on and on about what is different and what is similar about Salem and Athenian but I’ll leave that for another time. I’ll just briefly mention a couple of things I’ve done since arriving here. After my second week here, I convinced another girl to come with me to tour another town on Lake Constance called Meersburg. There is both a big winery overlooking the lake and an old castle there. The castle is where a famous German poet lived and worked until her death. It was really interesting to look around the castle and see all the different rooms and how they lived back then. As there aren’t any organized excursions for the exchanges here, I’m going to London this coming weekend to visit a family friend and the next weekend I will be staying with Theresa’s (the exchange from Salem at Athenian right now) family in Munich and they are going to show me around there. The weekend after that we have Carnival here at Salem which as I understand it is a weekend of parties where you dress up in costumes and have a good time. Then another week and I will be home.

My time here is flying by and I’m really going to miss all the great people I’ve met here and experiences I’ve had.

Until next time! Auf Wiedersehen!

I’ve been at the Gordonstoun School in Scotland for over five weeks now and I’ve had many notable experiences.

An interesting experience for me has been my participation in seamanship here at Gordonstoun. Seamanship is a three-day training program for all year 10’s in order to prepare them for a larger sailing voyage later in the springtime. Although I will leave for home before this larger sailing trip, I had a fantastic time during those three days. We began our instruction in a small school-owned building near Hopeman Harbor, and then worked our way to the boats. Still in the harbor, we began learning how to operate the many different and complex parts of the boat. Here is a photo of the boats still in the harbor:

Once our instructors were satisfied with our ability to “lower and dip” the sails, we set out into the Moray Firth. (You can look it up on Google maps to get a sense of where that is.) To safely exit the harbor, we had to row for a time. I also enjoyed the rowing quite a lot, strangely. Once we got out into the water, this is what it looked like:

While I have been known to get very seasick in the past—just ask Redden, Addison, Haley, or Abigail–I felt completely fine for the many hours we were out on the water. Unlike a few of my classmates, I was ecstatic to be out on the water instead of in classed. This experience has made me seriously consider taking up both sailing and rowing.

Being at Gordonstoun has made me appreciate both the relaxed environment Athenian creates as well as the democratic nature of the school. There is a uniform at Gordonstoun: black shoes, black slacks, a white button-down shirt, and a blue school sweater. I didn’t really get comfortable in it until four weeks had passed. Being in a uniform every day makes me miss the choice around what I wear to school every day. Over all though, wearing a uniform hasn’t been bad at all.

More notably, I miss the democracy we have at Athenian. It seems to me that Gordonstoun is fairly bureaucratic and that things do not easily change. While many people here comment on how casual Athenian is (calling teachers by their first names), I have to keep reassuring them that our classes are very challenging and we all work very hard. Because of the democratic nature of Athenian, we as a community can assess what needs to change and how. To me, Gordonstoun suffers from doing things traditionally because “that’s how it has been done for a long time.” Athenian benefits from playing largely by its own rules and constantly evolving to better educate its students for the modern world.

Both Athenian and Gordonstoun are Round Square schools and both represent the IDEALS in many ways; however, I think that Athenian is more academically challenging. For both schools, service, adventure, and internationalism are all taken very seriously, and time is allotted for students to have opportunities in all of these fields.  In order to make time for these, I believe that Gordonstoun somewhat reduces the difficulty of its academics. I have found that this is one of the main differences between the schools. However, the daily schedule at Gordonstoun is much more full and simply cannot provide the time required for more nightly homework. While this may sound like an insult, I don’t intend it to be and am simply commenting on the different ways each school has decided to spend its students’ time.

Dorm life has been much more comfortable than I had assumed it would be. I’ve made many great friends in my dorm. It feels a bit like a school trip sometimes, staying in a hotel and joking around with classmates late at night. I am constantly around people my age and it’s a bit liberating to be immature around people who won’t scoff at it.

My time on exchange has taught me how sociable I can be. I’ve been going to Athenian since 6th grade and have only had to make new friends occasionally at summer camps. Never have I had an experience quite like this one. While I was quiet and reserved for a few weeks, I slowly began to extrovert myself and make many new friends. It has been really fantastic to make so many new friends from all around the world. It has given me new confidence and has eased my worries about making friends once I leave for college.

In the past five weeks, I’ve learned a lot about myself. This has been a fantastic experience that I would recommend to all. I anxiously await seeing you all when classes resume in April.