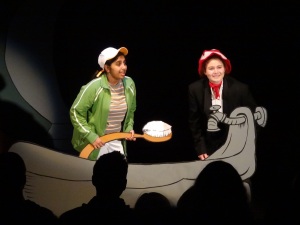 Props for Seussical which premieres Friday, February 28 at 7:30pm.

Tech Theatre Arts introduces students to the behind-the-scenes workings of putting on plays, concerts, benefits and special events. Student crews focus on scenery, props, lighting, sound, costumes, and production management. They are a part of every event in the Center for the Arts (CFTA) theater, setting up the space and running the shows. Work on the upcoming Winter Musical, Seussical, is now in full swing in preparation for our performances February 28th and March 1st. The student crews are working together creating all the elements of the incredible world of Dr. Seuss! 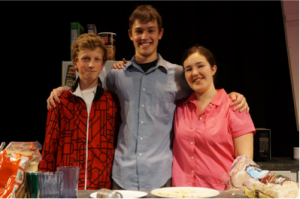 We surveyed the audience and 75 percent responded that the production was excellent. Some highlights include: “The level of acting was outstanding,” “great job with some sophisticated material,” “the comedy was well delivered,” “I loved the story and the acting, everything,” “Just watching the kids put it all on the line was awesome ”

We also raised about $1000 in donations. This is a fall play record and we are so thankful for all of your generosity. This will go to making sure we keep bringing you more quality theater and film that contributes to our Athenian community.

On closing night, there was a couple who came to see the play even though they had no affiliation to the school. Their 11 year old child was just diagnosed with ADHD and they said that the play deeply resonated with them. We directed them to Jeannine Morales, Athenian’s Learning Specialist, who helped them find more resources for their child. It is so exciting to be a part of a production that can actually help improve the lives of so many of our community members.

ACI: Drama is the introductory drama class for all freshmen. The class is a beginning improvisation class where we cover the fundamentals like the three rules of improvisation, characterization and storytelling.

This past semester, we had amazing success with our first two quarters of ACI: Drama. For the first time, freshmen put on their own improvisation shows for a live audience of invited guests. Over forty students during each show saw these classes perform exciting versions of Party Guest, Growing Shrinking Machine, The Bus and other improv games. For many of the class members, it was their first time on stage. We saw tremendous growth in every participant and the buzz among the audience was that they witnessed an impressive display of creativity and courage on that stage. It was so successful that students clamored for more. This spring, for the first time, we will be feature a Spring Improv Troupe with a mostly freshmen group performing. Stay tuned for more improvised brilliance.

A sample from the class’s original script.

We have had a very talented Drama Arts class this year. Drama Arts is a full-year intermediate to advanced drama class. Budding dramatists have been learning the intermediate skills of performing including improvisation and scripted acting. They performed with the ACI Drama group in two performances and organized the new Spring Improv Troupe.

Their next project is an original film written, directed, designed and acted by the class. After generating many ideas, the class picked an exciting story idea by Julia Plafker ’14 about a teenager girl hacker who discovers that “the singularity” has already happened. The singularity is the moment when artificial intelligence surpasses human intelligence and computers begin to dominate humans. We follow her journey to escape the tyranny of our new digital masters. Filming has begun this semester and we will be proud to present the final film during the Spring Film and Play Festival.

This is the first year of the Athenian Video Storytelling Project. It’s an exciting real-world, project-based class where students write, direct and produce their own documentary films about Athenian stories that aim for professional quality. Films from this class will be featured both in the Spring Film and Play festival as well as the Athenian website. The class spent last semester training in film technique as well as researching ideas for their films. Now, they are in production, interviewing Athenian students, teachers and other community members, filming events and diving deep into their subjects: Athenian pillar of democracy, Athenian Wilderness Experience, ceramics and 3D art, humanities and the Darfur Benefit Show, the boarding experience, A Journey from Public to Private Schools and athletics and our soccer team.

Extra support from parents in terms of donations and volunteering always makes our productions run extra smoothly. We are always on the search for parent volunteers and donations of food funds specifically. For anyone who is interested, please contact Sophie Needelman our Assistant Director and Parent Coordinator at sophieneedelman@gmail.com!