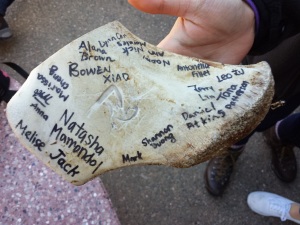 Friday, March 8, 2014 – It’s late afternoon, last class of the day, and some sixteen students and one teacher gather around a clay oven behind the Main Hall of Athenian. The oven has been cooking up heat since lunch time, and a few more students gather some brush to kick it further up a notch. The teacher presents a hip bone, marked with student names in Sharpie, and carved with the Mandarin character for patience, 忍 (rěn).

This hip bone, obtained from a butcher, symbolizes an oracle bone–an ancient relic that represents the first forms of writing and references. During the Shang Dynasty of ancient China, cattle scapula bones, or turtle shells, were inscribed with characters and basic pictograms, asking ancestors and gods questions about the near future, and possibly guidance for what actions to take. The inscribed bone was put into the fire in the hopes that it will pop and crack. The audible pops would be interpreted to mean something, as well as the cracks in the bone, possibly changing the carving of the character and thus causing another interpretation. 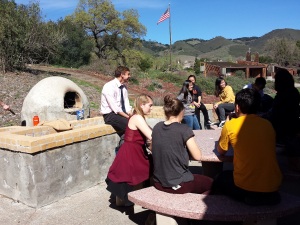 The timing of the bone burning was intentional: all but four of the students in our Modern Chinese History seminar are about to embark on the Athenian Wilderness Experience, Athenian’s most prominent rite of passage.* As we are reading Oracle Bones: A Journey Through Time in China, we wanted to re-enact the old tradition in a symbolic imitation of what would’ve happened in centuries past by inscribing our wishes for our classmates and ourselves. Combined, this little gathering behind the Main Hall represents the AWE and Oracle Bones coming together in an honorary (and relevant) ceremony of good-byes and good-wishes to the juniors embarking on the Death Valley AWE. 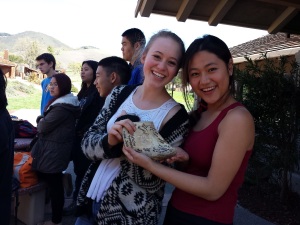 Ultimately, whatever interpretation would have been made in the Shang Dynasty of Ancient China, the interpretation this fine afternoon is clear: best wishes to all juniors going on AWE 2013-2014, and congratulations to the “AWE Heroes” who have already returned. We can’t wait to see you at Run-In on Thursday at 1:10pm!

*The Athenian Wilderness Experience, more commonly known as AWE, is a mandatory, 26~ day backpacking trip that all juniors are required to complete in either the desert of Death Valley or in the mountains of the High Sierras.