“All children deserve an excellent education, and we urge you, our educational leaders, to ensure that OUSD can attract and retain excellent teachers.” This is the last sentence in 10th grade U.S. History teacher Stephanie McGraw’s petition to Oakland Unified School District administrative leadership calling on them to raise teacher salaries. After just five weeks and a stint on Change.org’s homepage featured list, the petition has collected over 3100 signatures, generated substantial dialog, and received two official responses from the School Board.

When a much beloved 4th-grade teacher left Hillcrest Elementary in Oakland for more money at a school in Lafayette, Stephanie’s inequality radar perked up.  Already an active member of the PTA, she started looking in to more ways to get involved in the educational community where she lived (in addition to her involvement at Athenian).  At a PTA meeting in December, Hillcrest teachers came and spoke about the negotiations underway for teacher salaries and a few other issues.  As Stephanie writes in the petition,

Though we applaud Superintendent Antwan Wilson’s commitment to raising teacher salaries, his current plan of raising salaries by 10% over three years is not enough:  Oakland rents have increased 10% in this past year alone while the Consumer Price Index has increased 26% over the past decade.  Our teachers, who have seen a mere 3.25% increase in pay in the last ten years, have effectively had a pay reduction.  They need a much higher wage increase simply to continue living in Oakland and pay their bills (Jill Tucker, SF Chronicle, 11/20/14, Laura McCamy, 7/2/14,http://oaklandlocal.com/2014/07/oakland-rents-on-the-rise/).

The PTA offered to write a letter to Oakland Unified School District (OUSD) in support of the teachers, and they did.

But Stephanie left the meeting feeling like that wasn’t enough and asking herself, “How do you create political change?” and “What do I teach my students?” Do research. Get informed. Bombard people with positional power with emails and petitions.  Use change.org.  “I ask my kids to do it so I’m going to model it [around an issue I’m passionate about] and see what happens,” Stephanie said.

So, she started doing her own assignment.

Stephanie and fellow U.S. History teacher April Smock developed a project that students complete in the spring as a capstone to their study of modern-day injustices in the United States.  The goal of the “People’s Project” is to identify a social justice issue students are passionate about, conduct research to come up with a solution, and then create a grassroots campaign using social media to work within the system and wider society.  In the assignment text, Stephanie advises students, “there is no ‘right’ way to solve this problem–my hope is to get you thinking about ways to begin fixing the problems you see in America, working both within and outside of our current political structures to try to create societal change.” 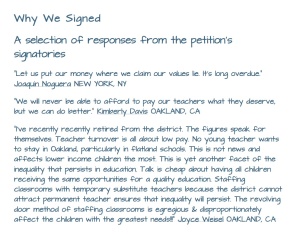 Stephanie spent several days researching the issues and then began writing her petition.  “I was a student writing a persuasive essay–it’s a four paragraph essay.”  She even had her mom—an English professor—edit it for her. “I went through the exact process our kids go through.  Since I didn’t have a teacher [to edit it], I went to my mom.”  Stephanie then sent it out to friends, her kids’ classes, and posted it on Facebook.  Because she does not allow Athenian students to blast their social media campaigns out to the Athenian community—they have to leverage their personal networks instead—she decided to follow her own rules and not send it to the whole community, just her close friends.

With modest hopes of a few hundred signatures, Stephanie was surprised and delighted by how quickly the petition took off.  People in the community signed it,  sent it to their friends who sent it to their friends, until Change.org highlighted it as one of their most active petitions on their site.  Vice President and Director of the Board of Education, Jody London, has responded twice on Change.org to the petition.  London’s responses, while acknowledging that “teacher salaries are not where they should be or [where] we want them to be in coming years,” neglected to address the other issues teachers are raising, nor did she outline how the district will work to increase teacher salaries.  Yet, Stephanie thinks London’s engagement is encouraging.  Public conversation between the members of the school communities and the administration is an important step forward.  Parent and Hillcrest PTA member, Michael Addy, echoed his goal that communication remain open: “Once again Jody, I do appreciate your response and the time you took to write. I know you want to resolve these issues also, and I hope the OUSD and the teachers can make this happen, sooner rather than later.”

Stephanie said that part of the reason she started the petition was because she wanted Oakland school teachers to know that their community supports them.  Lori Aguinaldo wrote in her signature on the petition, “I am an Oakland teacher and have been in the district for the past 7 years. I love my job but it is getting increasingly difficult to want to stay working in this district because of the lack of pay that my colleagues and I face. It is a little discouraging that Oakland teachers do not get recognized for all the hard work and time that we devote to our students.”  Stephanie hopes that the almost 3000 people who have signed the petition with their accompanying “reasons to sign” comments shows Oakland school teachers that their families are there for them.  Lusa Lai, another Oakland teacher, wrote, “Thank you for writing this! I am an OUSD teacher and appreciate your understanding and support!” Stephanie points out that just as Oakland teachers can see their many supporters in the comments, so too can the governing board. 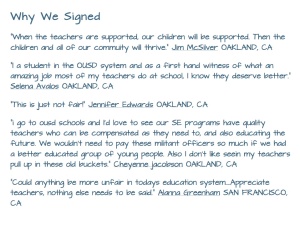 Stephanie is now particularly excited to start the People’s Project with her sophomores in the spring.  She is going to frame the project differently this year by sharing her own experiences, explaining why she started her own petition and why she cares.  “If I can tell them a story and get them to understand why I did this, I’m hoping to [inspire] them in their own projects,” Stephanie explains.

Asked whether she would change anything with the People’s Project based on her experience, she said, “It’s been a really powerful testament to experiential learning.” Looking for lessons from her own experience, she thinks she will recommend that students aim their petitions locally.  Rather than petitioning the Governor or the President, which many previous students did with little to no effect, she wants to encourage more local action.  Stephanie was able to feel the power of having direct conversations with the key players, and she wants her students to have similar opportunities.

One of the things that Stephanie has struggled with is how to wrap up the People’s Projects.  Often, student campaigns fizzle out and because of the nature of the course, there cannot be long-term follow-up.  She questions whether campaigns for social justice can ever have a truly satisfying conclusion, but she hopes to use her own experience to look for ways to conclude the projects, even if that’s to explore this question directly with her students.

Stephanie hopes that the petition will lead to real change in her neighborhood; but regardless of what happens, Stephanie has been personally affected by advocating for teachers.  “What’s been really powerful is that my own kids see me working on this at home on the weekends,” Stephanie said. “When you see something that’s not fair, a lot of people roll their eyes and say they can’t do something. When I see something that’s not fair, I want to figure out how I can fix it and make it better.  So I’ve been role modeling that and talking about it with my own kids who are just 6 and 10, and they get it.  This isn’t fair. My ten year old son will say, ‘My mommy is working to get my teachers more money.  My mommy thinks teaching is important.'”