By Eric Niles, Head of School

Earlier this month we gathered as a school to celebrate what would have been the 100th birthday of Athenian’s founder, Dyke Brown.  Several former heads of school, Eleanor Dase and Steve Davenport, spoke eloquently about their interactions with Dyke Brown and the lessons he taught them about education and leadership.  I left in ongoing awe of my predecessors in this job—they speak with a calm clarity that indicates the wisdom they brought to this School—and the vision that Dyke Brown had for educating a “whole person” and preparing her for a meaningful life as a citizen of the world.  At the very end of the session, students were invited to write and submit a short note about what Athenian meant to them.  One student, recognising that she didn’t have enough time in the moment to do this assignment justice, went home and penned the poem below.  Elizabeth, an 8th grader and a budding poet, says it better than I could.  Dyke Brown would be rightfully proud.

What does it mean to be an Athenian?
This is a question
that can’t be answered so easily,
because we aren’t all the same.
But, we are one.
We are our own people,
But we are one community.
We are Athenian.

We are intelligent.
That it is the reason that we are here.
We have potential
to impact the world and make a change.
We have the capacity to stand out
and show that we are the leaders of the world.
We are Athenian.

We are caring.
We travel the world to help those less fortunate.
We are loving
of everyone and everything, everywhere.
We are supportive
of everybody here, no matter what.
We are Athenian.

We are leaders.
We listen to everybody’s opinion.
We are followers
that listen to people’s ideas and follow through.
We are decision makers
and always consider the greater good.
We are Athenian.

Yes, we will go our separate ways
and we will do different things.
But we will always be together.
We are extraordinary.
We are individual.
We are one.
We are Athenian.

Middle School classes have focused their energies on Earth Day today!  From science to English to art, students spent the day reflecting on how they can reduce their impact on the earth. 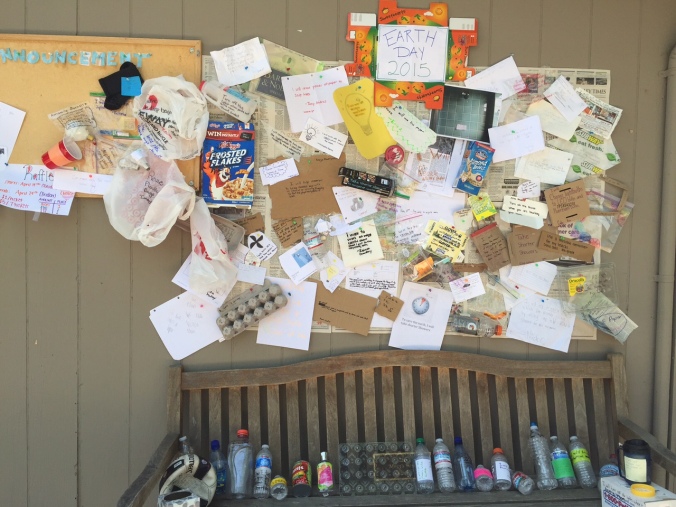 Students brought in used items and wrote commitments of things they could realistically do to reduce their environmental impact.

Students in a French class gave suggestions on how to be green. 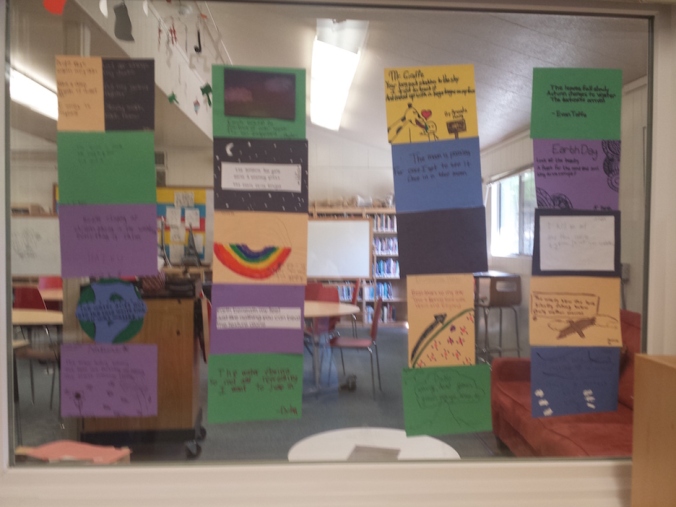 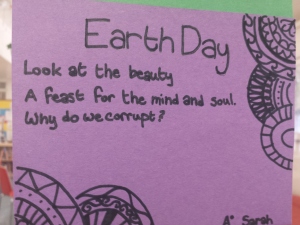 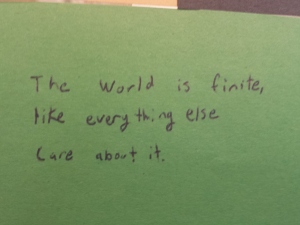 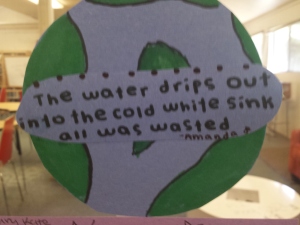 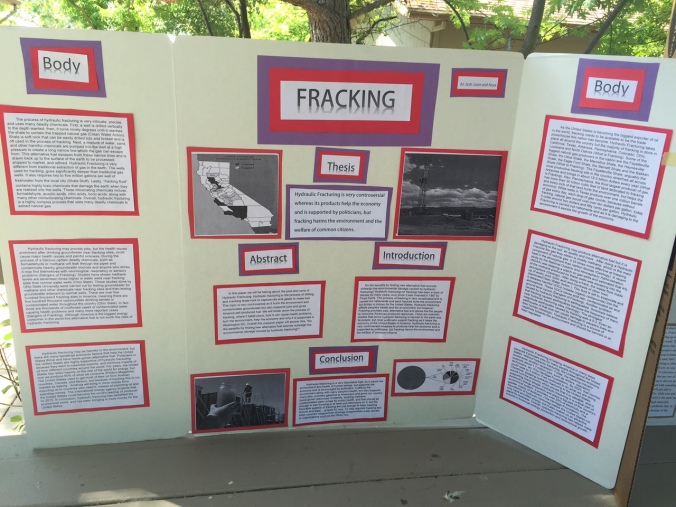 Eighth-grade students have been working on pollution projects and were able to display the culmination of their work today. 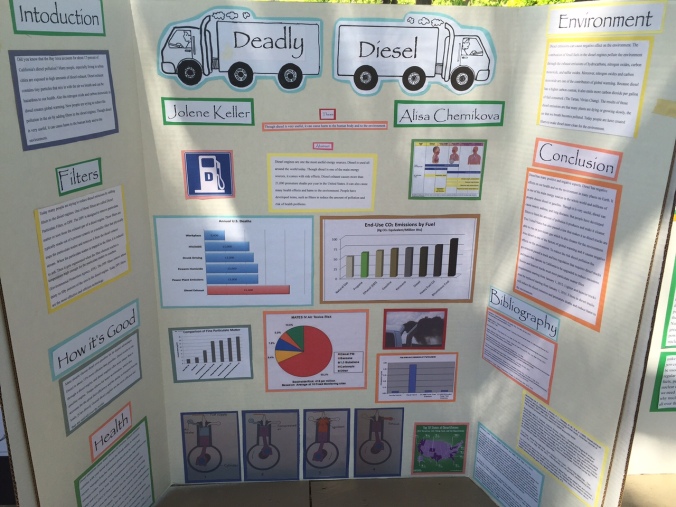 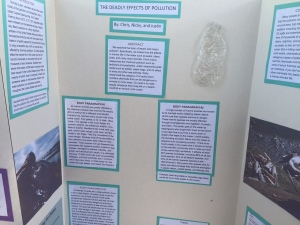 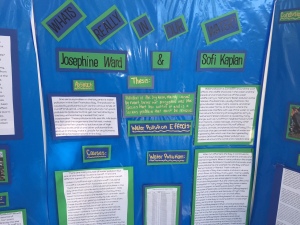 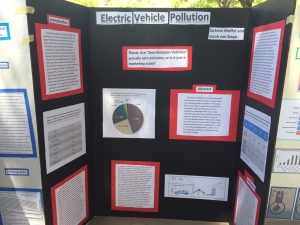 By Eric Niles, Head of School

As another college admissions season comes to a close, I was so pleased to see this article about Frank Bruni’s new book, Where You Go Is Not Who You’ll Be in the New York Times. I watch the anxiety of our students—and I think we are calm and balanced compared to many other schools—and I just know there is a better way to welcome our seniors happily into the world of college and beyond.  Please read this article and then think about the people you most respect in this world.  Where did they go to college?  Did they all go to some “top-ranked” (whatever that means) school?  Do you even know or care where they went to school, or do you care more about what they have accomplished?

There are thousands of great schools in this nation and any number of them are great matches for our kids.  Might the best match be one of the most competitive schools?  Of course, but let the match and the desires of the individual student, not some ranking, drive that decision. As Andrew Delbanco summarizes in his review of Bruni’s book, “[Bruni] wants to remind young people that what they get from college has almost everything to do with the attitude they bring to it and almost nothing to do with where it stands in the pecking order of prestige.” Once a match is made, then the magic happens when our children are surrounded by professors and peers that share their passions.

And as Bruni argues, where you go to college is just not who you will be.  No matter where your child goes after Athenian, I can say with confidence that they will be poised for a life of intellectual exploration and meaningful contribution.  They will do well and they will do good in this world.  As an Athenian graduate, that is who they will be.

by Mark Friedman, Director of Community Service and Round Square 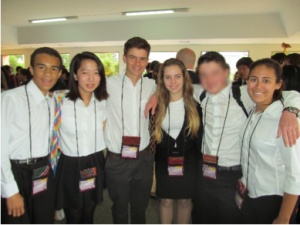 Greetings from Bogota! It is cloudy and cool here at 8,600 feet in the Andes. Bogota is a beautiful city, nestled in a valley of green mountains. The Athenian students are doing home stays with Colombian families and the host families met us at the airport on Saturday evening. They were all super welcoming.

People here are very proud of their nation, which has made a remarkable turnaround from the days of regular terrorist attacks and kidnapping 15 years ago. The keynote speaker on the first day, Pedro Medina, is a businessman who brought McDonalds’ restaurants to Colombia. He is now President of the “Yo Creo en Colombia” (“I Believe in Colombia”) Foundation and he told an inspiring tale of national transformation. That day our Baraza groups also met for the first time to talk about the speaker and get acquainted. 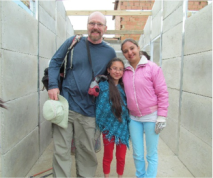 Baraza is the Swahili word meaning a public meeting space and these groups meet throughout the conference.

The second day of the conference, all the delegates spent the day building homes for low-income families in the San Luis neighborhood. Each of the eight baraza groups built a home. Members of the family who were going to receive the home spent the day with us and cooked a traditional Colombian potato soup for the group. Consuela was the woman in the family moving into the house that I helped build. It looked like she was near tears throughout the day. 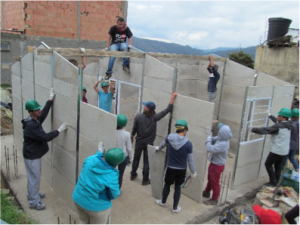 At one point, she was sweeping the concrete slab as her new home was being built around her. It was an amazing experience to start the morning with a concrete slab and supplies and nearly have the walls completed for a home in the late afternoon. And a couple of Athenian students were in groups that were able to finish the walls and put on the roofs!

Today, we left the city and got to see some of the beautiful countryside around Bogota. We spent the morning exploring the town of Guatavita, which included visiting a museum focused on the indigenous Muisca people. After lunch on a gorgeous lakefront, we traveled to the lake of Guatavita, a national park and a place the S 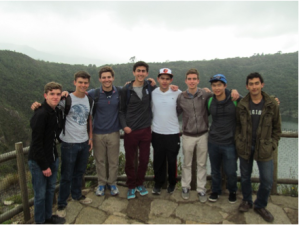 paniards thought was El Dorado. The lake is in a gorgeous little bowl, which the Spaniards carved a notch to try and drain the water out in search of gold.

The Athenian students are enjoying themselves and making new friends.

Everyone at the conference has been completely charmed by Bogota and Colombia. We only have one big complaint: the traffic. Yesterday we went to central Bogota, which took us over 90 minutes to reach.

We spent the morning doing a fun scavenger hunt. 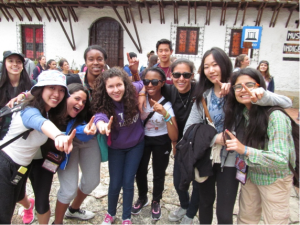 One task was singing a Christmas carol in a town square. For another, we had to help a local bakery sell arepas, which are sweet Colombian pastries. We stood on the sidewalk near the bakery calling out “Arepas! Arepas!” We managed to sell four!

We also visited two wonderful museums in central Bogota. The Botero Museum has a great collection of paintings and sculptures by the Colombian painter Fernando Botero. It also includes his amazing collection of modern art. The Museo del Oro (Gold Museum) has an outstanding collection of pre-Colombian artifacts. It provided a window into the local cultures before the arrival of the Europeans. 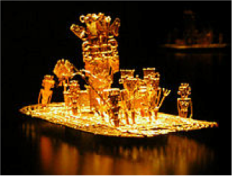 A highlight of our visit was seeing an artifact which depicts the raft where the new leader, covered in gold, made offerings in Lake Guatavita, which we had visited the day before.

Gratefully, the traffic on the drive back to school in the afternoon was uncharacteristically light and we got back in half the time of the morning drive. 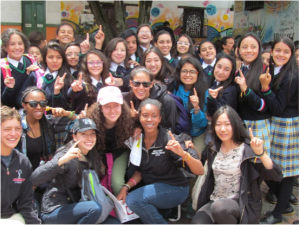 The Round Square Americas Regional Conference ended today with a bang. In the morning, we heard several great presentations. We learned about reforestation efforts in Colombia to counter climate change and global warming, a new effort to bring a Teach for America program to Colombia, and a very entertaining speaker who combined the theme and practice of magic with strategies for how to make change in your world and your life. 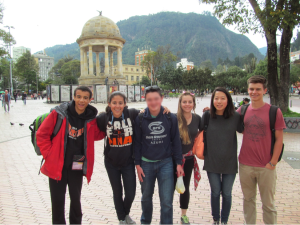 For the last two years, Colegio Anglo Colombiano (our host school) has partnered with two other organizations to run a camp for young people who were members of an illegal armed group in Colombia. In some cases, the young people left or were rescued from the illegal armed group as recently as a week before the start of camp. Due to security needs of the young people who were in the militias, we only heard from the Anglo Colombiano students who attended the camp. It was a very powerful experience for them. As student after student explained, they arrived at the camp with ignorance and preconceptions and left with a profound sense of their shared humanity and similarities. 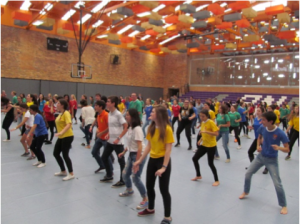 And then the fun began. There was a great salsa class in the school’s gym followed by a carnival with a five-piece band that played Vallenato. Vallenato is a folk music from the Caribbean region of Colombia. The band set off another round of wild dancing.

After the music and dinner, there were sad farewells to most of our new friends—except ones flying with us tomorrow to the Amazon.  We will be home soon after a few days in the Amazon!

Learn more about Round Square experiences at Athenian.