Last year at Joaquin Miller Park, the boy’s team lost by six points to College Preparatory School, and we were not able to win a single league meet that whole year. This snapped a three-year winning streak for the Owls. But thousands of miles later, even after losing on our home course by one point, we reclaimed the league title last weekend, beating College Prep 34 to 36.

One thing about cross country is that luck is non-existent: championships aren’t won on one lucky call from the umpire, or one lucky bounce of an onsides kick. Each person on both teams trained hard for the race, some for four years. But as you are on the starting line waiting for the gun to go off, most of the hard work is behind you: the workouts, the miles and at this point the chances of a miraculous 10 minute Personal Record are slim to none.

For those who want to improve on their performance for next year (which should be everybody on the team), winners are not made on the last 100m kick to the finish. They are made through consistent year-round training over track and cross-country.

This is best exemplified by Athenian 5th man Andrew Kocins. In scoring, the 5th man is the most valuable, because as the last scorer they have the risk of scoring the most points. However, through hard work, Andrew set a 30 second PR and moved up from 18th last year to 10th yesterday to secure a victory for the owls.

This year, for the first time, an Athenian, Dara Goldfein, won the girls’ JV race. Back in 2012, during my freshman year, our girls team only had one committed year-round runner, and due to our lack of depth, College Prep swept the first 10 places in the JV race. Three years later, the girls program has become incredibly  successful, winning multiple league titles, and placing 3rd in NCS last year. While they did not win league champs this year, the JV top 7 finishes of freshmen Dara Goldfein, Jenna Hajny  and Anne Domning all bode well for the future of the team.
For many, Tuesday’s meet was the last race of the season. For seniors Cade Niles and Vishnu Peri,
today marked their last cross country race in their high school careers. We will be holding daily practices all the way up until Thanksgiving break and all runners are welcome but not required to come out and keep running. At the end of the first semester, usually right when final exams begin, we do an annual summit run to the top of Mt. Diablo. If you have still been running, then you are welcome to come on out and conquer the 13-mile, 3500ft elevation gain run.
For our varsity teams, the season is not over yet. On Saturday, November 21st, we will compete against schools from all over Northern California at the NCS meet at Hayward High School. The girls will race at 10:40 followed by the boys at 12:20. Both teams will attempt to qualify for the California State meet in Clovis the next weekend. The top 5 boys teams and top 6 girls teams make it to  State. We look forward to taking this momentum into the postseason.

by Lauren Railey, Head of School

Eighth graders enjoyed off-campus field trips based on their languages of study.  Spanish students toured the Dia de Los Muertos exhibit at the Oakland Museum. In addition, they had the opportunity to visit the Pacific Worlds collection, where they viewed artifacts and participated in hands-on activities that connected back to their sixth grade social studies unit on Polynesian Cultures.

French and Chinese students traveled to Stanford to visit the Rodin exhibit and toured the French and Asian exhibits at the Cantor museum on the Stanford campus. The docent leading the French students spoke entirely in French!

Seventh graders participated Panathanaea, a culminating unit for Ancient Greece in which students broke into various city-states, dedicated altars to their patron gods or goddesses, competed in Athenian’s own version of the Olympi

c games, prepared Greek food, and were challenged by Plato’s ethical dilemma of the Ring of Gyges. Lastly, our thespians performed Aeschylus’ tragedy The Oresteia for friends and family. On to Rome: Carpe Diem, as they say!

Sixth graders spent part of the day learning Scratch programming (a first experience with coding for many of them) and created their own animation sequence. They also worked on pattern recognition skills and developed their own patterns to try to stump their classmates and teachers. Learning how to code helps students develop a different set of analytical reasoning skills that can be applied in both the classroom and the tech world. Students will have further opportunities for programming in various electives and future Focus Days. 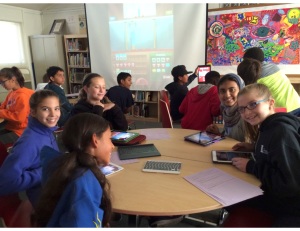 This past weekend, both sections of the International Relations course attended the Contra Costa County Model United Nations conference at Diablo Valley College. While there, we made friends, bonded with our fellow Athenians, and had fun acting as professional diplomats.

C-period was representing Saudi Arabia while E-period was from China. C-period said they were able to experience the work of the delegates within the United Nations and its various branches. C-period, aka the China delegation, also liked how we presented our country’s policies, debated possible solutions, and drafted resolutions to be passed throughout the two days.

E-period enjoyed communicating with other country’s delegations through note passing, debate and the dynamic process of passing resolutions. We all thought the conference was challenging and exciting. We also felt that the extensive research and writing of our “country books” we prepared in anticipation of the M.U.N. conference was incredibly useful. From the conference, we improved our public speaking skills and learned much about the procedure and style of debate in the M.U.N. and we see ourselves as global citizens. We are glad to have participated in this unique experience and we learned a lot about ourselves and our fellow delegates.

China is proud to say that our Security Council committee delegates Madelyn 6 and Dylan Ratner ’17 received a verbal commendation while the delegation of Saudi Arabia received two awards. Nick Armanino ’18 and Nia Warren ’16 won the “Exceptional Delegate” awards, which is the second highest honor. Congratulations to Nick, Nia, our UNSC members and the entire Athenian M.U.N. delegation.