Model UN is a simulation of the United Nations conference, which brings high school students that represent one of 193 countries together to discuss international issues and crises and propose solutions to them. According to the UN Charter, the mission of the United Nations is to encourage and maintain international peace and security, friendly and diplomatic relationships with other countries, as well as to create an international center for nations to work to achieve these common goals. Each delegation is assigned a country, and as a class we represented Israel.  As delegates of Israel, we were divided into separate committees where we discussed and debated issues such as drones, organized crime, and the Zika virus, hoping to pass resolutions proposing solutions to the problem through Israel’s perspective.

In order to be fully prepared for Model UN, we began by researching the political history of Israel and various country policies before going in depth on our particular committee topics. After we finished researching Israel’s global priorities, human rights concerns, and current events, we started to focus on our assigned committees and wrote position papers to further delve into and propose solutions to the topics we would discuss in our committees. Despite the arduous process of researching and putting together our country book, our hard work paid off at the conference when our books provided valuable information that we were able to quickly utilize during our committee sessions.

In the committee meetings themselves, we were challenged explain and advocate for our country policies to the best of our ability, and apply these policies to potential solutions.  We talked about issues in moderated caucuses and we wrote resolutions and collaborated with other delegates in unmoderated caucuses. In our experience, representing and speaking for a certain country in a conference was be challenging at first, but once we got used to the MUN procedures and language, most of us became much more comfortable and active participants. This came much easier to Elliot Sasson, a student-delegate who represented Israel because it is a country that he has an emotional connection with and has visited multiple times. The MUN experience was admittedly challenging, but we learned a lot during the process and gained experience we can apply throughout our lives.

Despite the common perception of Model UN as a debate tournament, it actually entails much more preparation, applied skill, and enthusiasm. As someone who has participated in parliamentary debate, I can tell you that Model UN is a totally different experience. Instead of short prepared speeches delivered by participants in a formal debate, committee meetings are unpredictable as there is no clear victory or defeat. Other than a one-minute speech, the rest of the meeting depends solely upon the opinions brought up by the delegates, which contributes to how much energy is needed to participate. In regards to the personal interaction during the meetings, it is definitely out of some people’s comfort zone to constantly engage with strangers who you refer to by the country they represent. Nevertheless, Model UN is a must-do for anyone interested politics or international relations and will definitely boost one’s knowledge of world affairs in general, which perfectly envelopes the Multicultural understanding pillar at Athenian. As a class, we performed very well at CCCMUN and 2 out of the 5 delegates representing Israel won awards. Hannah Williams won the award for “Outstanding Delegate,” the top most honor that can be received and Rahul Arockiaraj won the award for “Exceptional Delegate,” the second most honorable award. Also from the F Period class, Devin Dhaliwal won the “Distinguished Delegate” award which is the third highest honor.

As participation within the Athenian community grows, so will our opportunities to explore deeper into the world of MUN. For example, this year we got invited to visit the New York City MUN, which takes place at the UN headquarters. The competition includes possible appearances from UN Secretary General Ban Ki-Moon and former secretary of state Condoleezza Rice. This and other potential opportunities that may come up only benefit the Athenian community, in general. Again, as a class, we would like to stress the amount of knowledge gained from MUN and strongly recommend it to anyone who is even remotely interested. Please spread the word to anyone else you might think will enjoy taking part in MUN. 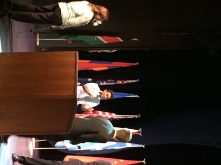 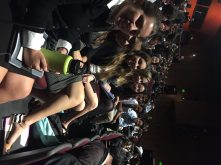